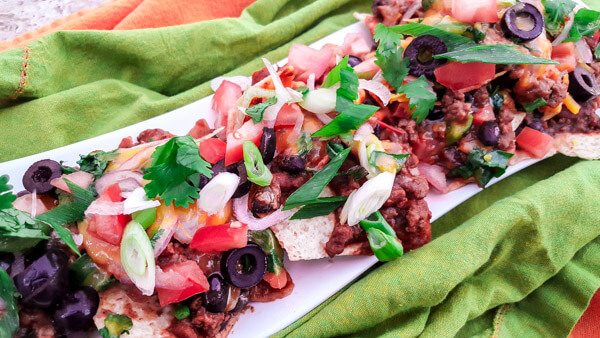 Who doesn’t love nachos especially Nachos Supreme?!  Topped with all the goodies.  The refried beans, onions, tomatoes, scallions, black olives, serrano peppers, jalapeños, cilantro, salsa, sour cream and of course whatever meat you like…..and whatever else your little heart desires!

This is always a quick appetizer I can make for my family and sometimes we even have it as a meal because sometimes you just want a little bit more!  And you know me and my Mexican appetizers, they always have to have a little kick to them.  So for my Nachos Supreme, I also added some salsa verde!

Because in my opinion anything tastes better with a little kick to it.

I like to make my Nachos Supreme with homemade baked tortilla chips but I was running a little late doing some Christmas decorating and wrapping, so I decided to use the store-bought kind.  And of course it was as delicious!

Did you know nachos were invented in 1943 in Coahuila, Mexico by a gentleman named Ignacio “Nacho” Anaya.  As the story goes, these woman were on a shopping trip shopping and ran into a restaurant that had already closed and Mr. Anaya, concocted a dish together with what he had left in the kitchen.  He quickly cut corn tortillas into triangles, fried them and topped them with melted cheese and sliced pickled jalapeños.  When the women asked him what was the name of the dish, he called them Nacho’s Especiales or Special Nachos!

Anaya went on to open a restaurant called Nacho’s Restaurant.  Soon the word spread and the rest is history!

October 21 was declared, the International Day of the Nacho after Ayana’s death in 1975.

Now on October 13th and 15th in Piedras Negras, Coahuila, Mexico, the International Nacho Festival is held and features the biggest Nacho of the world!  Which is later on registered in the Guinness World Records.

So let’s get to it my friends!  These are soooo good! 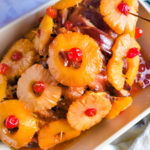 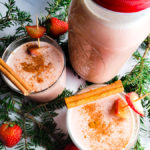